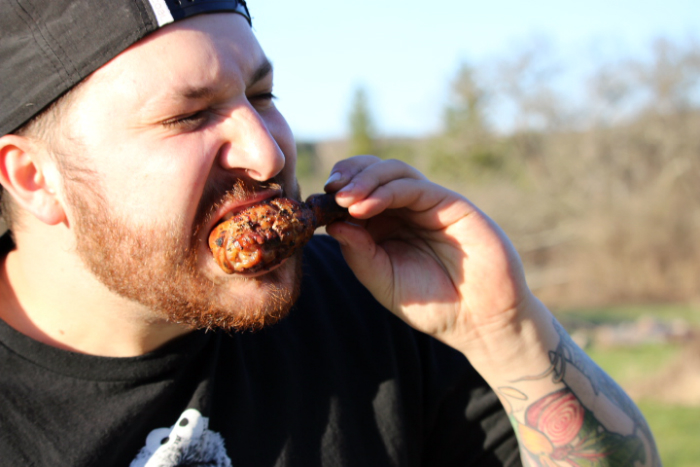 Spiedie Chicken is one of the best forms BBQ. With summer quickly approaching, who is not thinking about having a backyard BBQ. Chef Frank loves spiedie chicken and had it every summer growing up. If you have not heard of spiedie it is because it is not really known outside of central NY. Since 1983 Binghamton, NY has had the annual Spiedie Fest and Balloon Rally. Delicious, tasty and BBQing is a lot of fun. Spiedies are marinated first, then BBQ. If you never had spiedies chicken before, we highly recommend it.

Awesome for dinner and even better for lunch on a sandwich. Spiedie Chicken recipe is quick, easy and quite tasty. Why is it called ‘spiedie’ (SPEE-dee) comes from ‘spiedo,’ the Italian word for spit, and simply refers to meat grilled on a skewer. Invented in central New York by an Italian immigrant named Camillo Iacovelli. He broke all the accepted rules on marinating meats but it’s heavenly eating!

Bowl or tupperware container with lid

Combine your marinade and chicken legs in a large bowl or Tupperware container. Marinade for 24 hours. Remove your chicken from the marinade and set aside until coals are hot and grill is ready. Grill the chicken legs until they get good char marking. About 15-20 mins. Insert a meat thermometer until it reads 160 degrees. Serve immediately over spinach and cilantro. This dish is great for parties with lots of friends or a dish to pass. Enjoy!